Skip to content
Home > Uncategorised > Modern Warfare! Or: How I employed a vast number of gadgets to catch a tiny mouse. 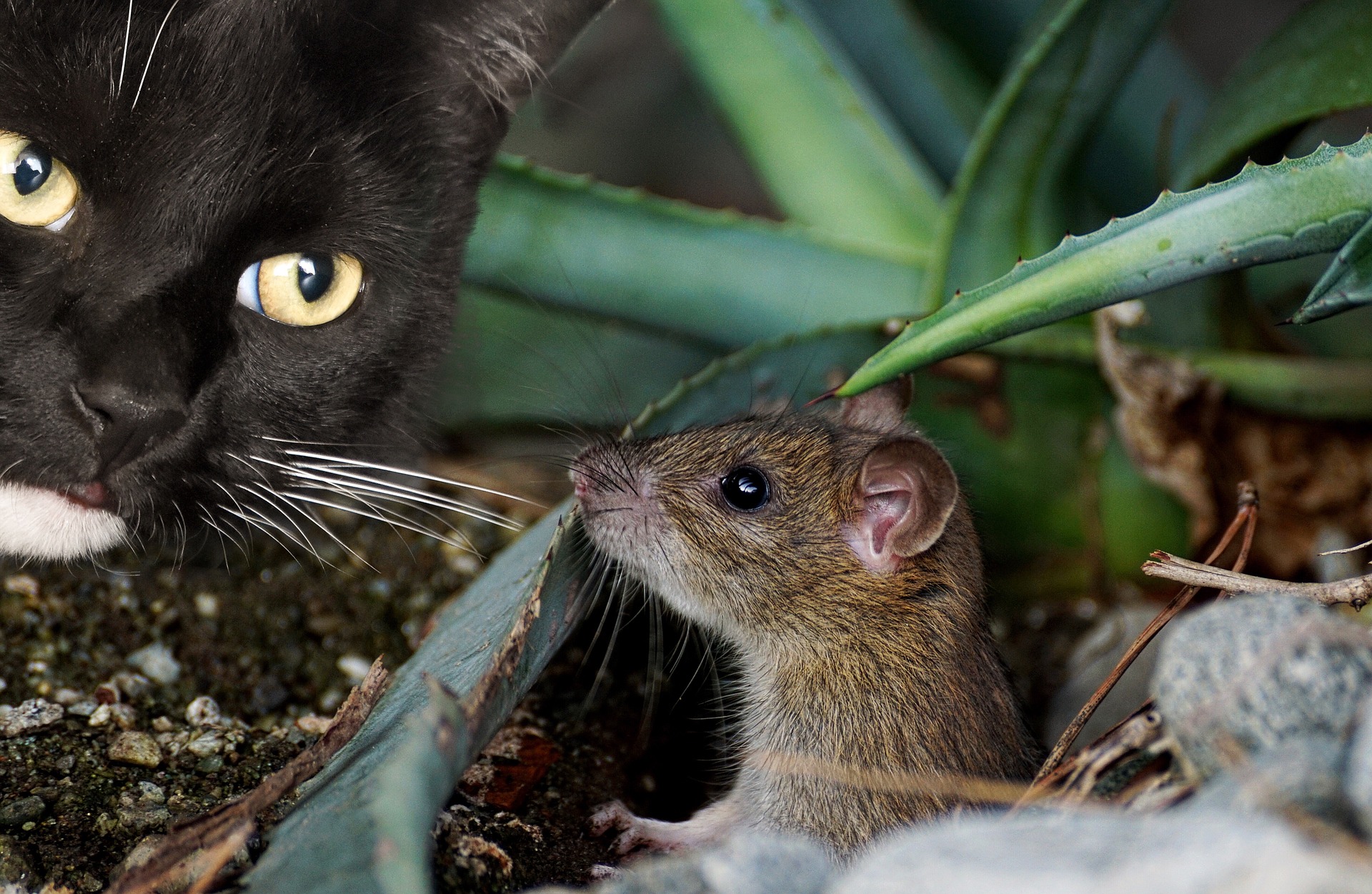 Modern Warfare! Or: How I employed a vast number of gadgets to catch a tiny mouse.

I saw a mouse!

There… on the stair!

Where on the stair?

The Amsterdam-themed conversation between me and my wife the other night.

One of the problems with living in a cheaply-converted Victorian flat is the vast number of gaps and holes in the fabric of the building. These ingress points are especially attractive to our rodent friends as the nights start to draw in.

I set up one of these “humane traps” with a big blob of peanut butter in it (the cheese thing is overstated). There’s a spring-loaded platform half way down that drops the front door when a mouse stands on it.

Five minutes later: click, and I have a new pet. I release it in a large flowerbed outside and return triumphant to my top-floor flat.

This is not the end of the story. A wildlife expert in the family (retrospectively) told me that you need to release a mouse 3 miles away or it’ll probably come back. I didn’t know that, so it did.

Despite a thorough clean to get the murine stress chemicals off it, the trap seemed to be less-appealing this time. Mice aren’t stupid. Like the Borg, they learn and adapt. This time it found a bag of peanuts I’d left in the side of my North Face rucksack and, being a malicious little sod, gnawed in through the side of the pocket instead going in through the open top. I took all the food out of my rucksack, cleaned up and reset the trap. The following night it found a forgotten bit of shortbread in my other North Face rucksack and put a hole in that, too. I briefly considered borrowing a cat.

The mouse is ignoring my trap but I know know where it likes to go (my rucksacks) and what it likes to eat (also my rucksacks). I set up a containing wall of boxes and wait. At 0100 I hear scuffles and nibbling. I get it pinned in a corner and push it towards the trap. It completely ignores the trap, runs Inception-style along the stair riser and disappears into a long, packed and inaccessible cupboard. I decide to call it a night.

If in doubt, use more tech

I’m at war with this fiend but I don’t want to harm it, just keep it out of my flat and off my stuff.

My campaign needs to employ ISTAR and PsyOps. Chemical weaponry was tempting, but my experimental homebrew cider is probably classed as cruel and unusual.

…which, as Tom Clancy aficionados will know, stands for Intelligence, Surveillance, Targeting And Reconnaissance. In short, I need to find out where that darned mouse is and what it’s doing!

Mice are mammals so they give off heat. This is a FLIR thermal-imaging camera that clips on to the bottom of my phone.

The bottom lens looks opaque to us, but it’s transparent at the long-wave infrared frequencies that room/body-temperature objects emit. The top lens is a visible-light camera that produces a picture that can be superimposed over the thermal image.

The mouse is very keen on my “Covid cupboard” (formerly the “Brexit cupboard”). It’s full of tinned food, wine and – most relevant – plastic bags of dry food. Here’s a picture taken with that thermal camera during the day:

(Yes, that is a toilet. A small flat needs a storage cupboard much more than it needs a guest loo).

You’re seeing the visible image (writing, outlines) superimposed over the thermal one (hot and cold). Hotter things are orange, cooler things are purple. The particular shade of orange in the crosshairs corresponds to a black body at 22.3C.

But there’s a problem.

Just like visible light, IR reflects off things. That isn’t actually a hot-spot on the porcelain toilet, it’s the specular (mirror-like) reflection of something hot in the room outside. You can see other specular reflections on the beer can and the wine bottles.

Similarly, it’s unlikely that the side of the Badger Beer box is colder than the front. It’s more likely that the front is diffusely lit in long-wave IR from a hotter object outside.

What we’re seeing is a combination of the black-body radiation of the objects in the picture (emitted because they’re hot) and the reflected emissions of other stuff (just like visible light bouncing around a room lighting up the shadows).

It won’t be as bad at night, but it’s still going to be hard to see the heat given off by a tiny mouse hiding in its Claret climbing frame when all of those glass bottles are strongly reflecting the heat of a sleep-deprived human holding a thermal camera at 3am.

I haven’t given up on Infrared, but I need to use a different type. This is a cheap Chinese IP camera (firewalled to within an inch of its life, I assure you):

It supports Power over Ethernet (PoE) so there’s only one cable to trip over. The black legs are my own 3D-printed additions to make it stand up straight. In this case, I’ll hook them over a box to make it look vertically downwards. Video records to my 24TB NAS so I can review it the day after. You could probably apply object recognition to the video stream to trigger an alert, but it isn’t necessary. That mouse has no problem waking me up at 3am.

Notice the ring of LEDs around the lens. The CCDs used in these cameras are sensitive a bit beyond the visible spectrum, and those LEDs are near-IR emitters (near to the visible spectrum, as opposed to the far-IR used in thermal imaging). When it gets too dark for the camera to see visible light, the LEDs turn on and illuminate the scene in still-visible (to the camera) near-IR. Neither humans nor mice can see IR so, as far as the mouse is concerned, it’s still dark.

I also set up a second camera near the likely entry hole to the flat to confirm that’s the one it’s using.

Gotcha! She’s found some rye bread and scattered it all over the floor, and she’s studiously ignoring the trap with the nice tasty peanut butter at the top of the picture. She also looks pregnant – not good if I want to reduce my resident mouse population!

I need to get inside their heads. How do they think? What attracts them? What are they afraid of?

Since mice aren’t humans[citation needed] I’ll extend this beyond simply “messing with their heads” to understanding other psychological differences that can usefully determine likely behaviour.

Mice have poor eyesight but excellent hearing and smell. They rely on chemical signals to find food, know where another mouse has been and if it was stressed when it was there. They’re understandably repelled by cat urine but I don’t particularly want to spray that around my wine cupboard. That said, my experimental homebrew cider looks, smells and tastes very similar.

Mice are preyed on by just about everything with teeth, beaks or legs. They are therefore very uncomfortable in open spaces and will stick close to small – preferably dark – hiding places.

In summary: I can make it scared by exposing it to bright lights and open spaces and it will seek a small dark place to hide.

Mice can’t see IR so the cameras are the best way to see what they’re up to and where they hide when scared.

At 0300 the camera picks up a mouse in the cupboard. I turn on the light and the mouse retreats to its hiding place behind the door, as anticipated. I look behind the door and… nothing! It’s vanished.

I think this one is male so I probably still have a pregnant female somewhere in the flat. I decant the mouse into the trap and take it for a walk. A long walk, this time.

Back in bed at 0400, and half an hour later I hear the other one. I’d like something a bit less labour-intensive this time.

My existing trap is transparent. This is very useful for seeing if it contains a mouse, but it isn’t a very comfortable place for the mouse to be. I wanted to leave the first one in the trap until morning, but it went banzai as as soon as I turned the light off. Throwing a towel over the top didn’t stop it clattering, banging and trying to gnaw its way out.

Professional small-mammal people use a Longworth Trap which is much better. It’s made of gnaw-proof metal and it’s got a big holding box at the back that can be filled with grass bedding so the prisoner can wait in comfort.

They also use better bait. I’m trying this stuff in my recently-borrowed Longworth trap. I know where the mice normally like to go so I can put the trap on their route.

That takes care of Incident Management. I also spent a bit of time surveying the flat and covering up all the obvious mouse-sized holes to the outside world. That’s the Problem Management bit.

Fingers crossed it all works!